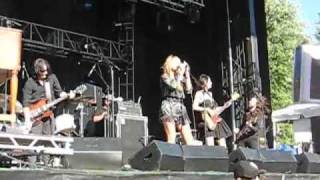 A few weeks ago, I did a post on the North Coast Music Festival in Chicago over Labor Day weekend. And I mentioned that Grace Potter and the Nocturnals played a cover of Jefferson Airplane’s White Rabbit. Well I found of a video of that performance, aaand I found out that her version of the song is featured on the Alice In Wonderland sountrack from the new Johnny Depp film. Here’s a link if you want to get the whole soundtrack, it features some really great artists.

i want my MTV!

Ive always been a big fan of music videos, and Im sad that they arent as big of a thing as they were back when I was growing up. I remember back when MTV actually played music, before all the dumb reality shows and stupid skanky dating shows. When TRL was on every day and they played ONLY music vids after 10pm. God I miss those days. So heres a throwback, of all of my favorite music videos. DESTINY - ZERO 7 talk about an amazing video. god this is so artistic and simple and b

and everything is going to the beat…

i love when music videos correspond to the beat in the song. these next couple of videos are prime examples of the content of the video being driven by the beat of the song. every little detail of the song, from a little bell to the bass drum effects the visuals in the video. its so cool and so well thought out FORT KNOX - GOLDFISH you might recognize this track from those hampster Kia Soul commercials. I think that really put Goldfish on the map in America. definitely check

I believe that soundtracks are CORE to a movies soul. Like a reaaaaallllyyyy good movie always has a really good soundtrack. Cuz if you don’t have the right music then its not gonna help the movie. So here is my list of my top favorite movie sountracks: 1. Almost Famous Definitely my FAVORITE soundtrack ever. I mean its got ALL the best classic rock songs on it, and the music plays such a big part within the movie its hard not to love every song. What other CD can you find Si

I couldn’t believe when I heard about this festival that it was only $75 for three days. It was a weekend full of ALL of my favorite bands in one tiny little park on the west side of Chicago. Now Lollapalooza comes through Chicago every summer and for three days the tickets can come close to $300. I thought that maybe I had read it wrong and it was $75 a day, but no, it was really $75 for all three days of the best music a small festival could bring together. Friday started w

SOUND TRIBE SECTOR 9 KICKS OFF THE SUMMER AT RED ROCKS

i want my MTV!

and everything is going to the beat…

Climate change: why the Guardian is putting threat to Earth front and centre

Ralph Steadman on Charlie Hebdo, the Right to Offend and Changing the World

We Are But Seeds of Social Change